My second Ohlone Wilderness 50K trail run! You'd think it would have been easier than the first time, but that certainly wasn't the case. There were a couple of moments about half way through it when I was wondering what I would say at the next aid station if I couldn't continue. And how would they get me off the course to an awaiting Shalimar in Livermore? I've often pictured myself being plucked off the course by helicopter - me on a stretcher. Haha! But was that really how it was going to play out?

Fortunately it never got close to that point, and in fact I felt pretty strong by the end of the race. But the course really kicked my butt along the way. I was having problems popping up all over the place. First of all, my ankles were tender even before the race began. The last couple of months of training got messed up due to a couple of sprains to the same ankle within a few weeks of each other (thanks Daniel!). Shalimar described it as me slacking off in my training. Maybe I did a little... ;-) But I generally felt prepared cardiovascularly. If I was going to have any problems finishing, I was sure my ankles would be my downfall.

At about Mile 5, the arch of my left foot started to hurt. Mile FIVE! 26 miles left to go! It was painful pushing off. I asked Don about it. Thinking the worst, I thought it might be the onset of plantar fascitis, but from my description, he didn't think so. I took an Advil and some salt pills figuring it must be some sort of inflammation or cramping. By the time we reached Sunol at around Mile 9, the pain had simply gone away. Whew! Dodged a bullet. But that didn't last for very long...

Between Sunol and Rose Peak, Miles 9-19, is when I really slowed down. Sharp pains on the lateral side of my right calf muscle just behind the knee took the place of my arch problems. This is about when I was thinking about taking that helicopter ride. It especially hurt when extending my leg going downhill to the point where I had to start walking the downhills. I found myself spending most of the race thus far compensating for all the aches and pains I was having. I had to descend sort of sideways with my left leg leading the way to protect my right calf. I wondered what it would be like to run the entire race pain-free. What a great thing that would be! I took another dose of Advil and more salt pills...

By Mile 24 the pain started to subside a little bit and I got my second wind. I finished the race with a time of 7:33:11, almost 9 minutes better than last year. A PR! ;-) Ironically, about the only thing that didn't hurt by the end of it all were my ankles!

A GPS log of my run can be found on EveryTrail.com: http://www.everytrail.com/view_trip.php?trip_id=639784

I can't wait for next year!

All photos by Shalimar except for photos #1 and #2.
Read More 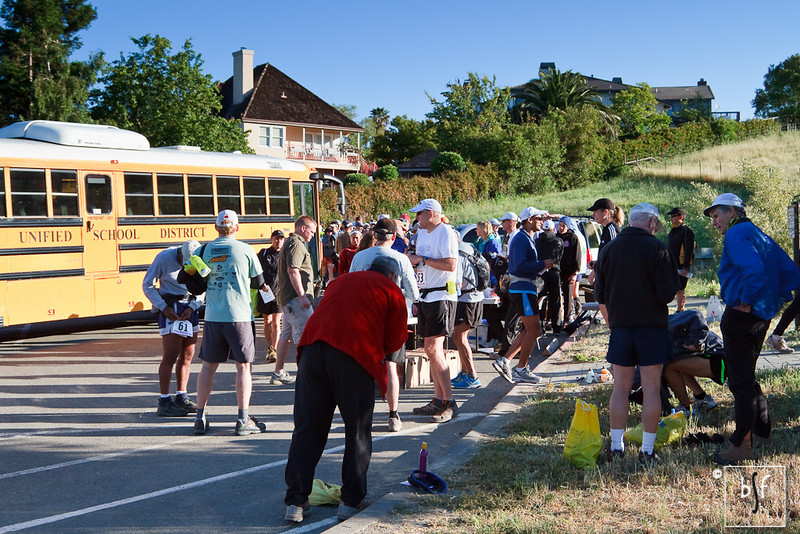 The buses arrive at Mission Peak's Stanford parking lot full of runners who started their day where it would end up - in Livermore. Fortunately for me, Shalimar dropped me off at the MP parking lot and would pick me up at the finish. The runners are getting their racing bibs and doing their last minute preparations. Photo by Brian.